One week into 21 Days of Bradley Cooper and I might be done.

Not done with loving Silver Linings Playbook. I went to see the movie a second time today (how long has it been since I went to see a movie twice IN THE MOVIE THEATER?) and loved it again.

Here’s why:
+Amazing performances across the board.
+The movie has such a strong visual sense of itself. Every scene’s evocative.
+Wild & weird mashup of genres: it’s a family drama, and a personal-redemption-journey, and a romantic comedy, and a come-from-behind sports drama.
+It nails themes I truly believe in: redemption is possible, being authentic is messy but worth it, you should stand by the people you love, normal is boring.
+Bradley Cooper himself, of course. I was so startled at his performance. Who WAS that guy, I left the theater wondering. I knew he’d been “Sexiest Man Alive,” but barely–when he got that sobriquet, I had no idea who he was. After Silver Linings Playbook, I started getting some of his older movies from the library. Here’s how little I knew–I kept waiting for the time-traveling hot tub as I watched Hangover.

In his Oscar-nominated performance, he shows a range I haven’t seen yet in any of his other movies. There are hints of it in a lot of his movies, so if I’d been a fan before, I wouldn’t have been quite so surprised, but nothing with this much anger, affection, vulnerability, humor, bravado, coolness, sexiness, fear, courage…. What a part! And he nailed it.

But wow–one caption for this photo of Mr. Weinstein & Mr. Cooper after the Golden Globes said something like “What is Harvey telling Bradley he has to do?” I’ll tell you what he’s telling him. “Go on every, single talk show available between now and when people have to turn in their Oscar ballots.”

And spend some time on public service type appearances, because the movie genuinely does humanize mental illness, and genuinely does honor the supreme effort individuals and families have to make just to have a chance at doing regular stuff.

The cynic in me wonders just what this writer wondered about the meeting between Mr. Cooper, David O. Russell, and Vice President Joe Biden:

“In addition to shining a light on mental illness, Russell and Cooper — both Oscar nominees — could help the standing of ‘Silver Linings Playbook’ within the Academy as well. As Deadline.com’s Pete Hammond noted, the Best Picture nominee is often light-hearted, and shifting the conversation to its more serious aspects could help ‘Silver Linings Playbook’ gain traction within an awards body that doesn’t often reward romantic comedies.”

I suppose it’s possible that they’re all calculating and cynical out there in Hollywoodland.

I suppose it’s also possible that Mr. De Niro was acting when he cried on Katie Couric’s couch.

Could also be possible that Mr. Cooper was acting when he was overcome by emotion repeatedly on his own appearance on “Inside the Actor’s Studio.”

But you know what? I’m not that cynical. If the University of Montana (where I got my MFA) had cause to ask me to appear in front of a crowd, and my friends from grad school showed up, and my parents were there (and one parent were seriously ill), I think I’d be pretty gosh-darned verklempt myself.

As for the Hollywood Juggernaut of Promote-Promote-Promote, I think they’re all being good employees and promoting the movie like crazy. They do know where their paychecks come from, after all.

But until Tuesday, February 19, when Oscar voters have to return their ballots to Price Waterhouse, I think my Bradley Cooper Google alert will be full to overflowing. 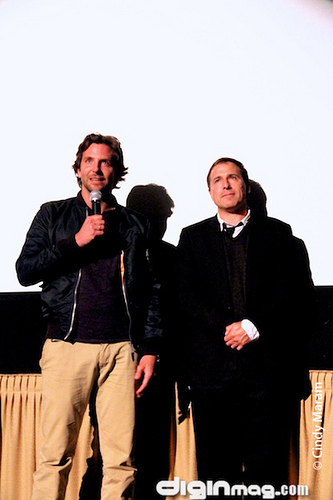 They looked tired, even then. Or maybe I’m projecting. I’m tired. And I’m not even promoting a movie.

However tired they might or might not be, there are only 10 days left before the voting is done. Only two weeks before the Oscar ceremony.

And then forever to keep talking about the best movie I’ve seen in a long, long time.