The Year of Buffalo Pokey

An embarrassment of entertainment riches, really.

In less than a week, all within a few minutes of my house, I’ve seen two great plays and one great concert.

Pokey LaFarge and his horn section.

All that greatness is dizzying, apparently.

In a dizzy moment, I asked the usher to help me figure out where I was sitting for David Mamet’s American Buffalo last night.  She looked at the ticket, here:

“You’re in Aisle 2,” she said (which was actually the only thing I was confused about–still not quite familiar enough with the aisles in the wonderful Touchstone to know for sure where to go). “Row E, Seat 204,” she said.

Well, all of us looking at the ticket now can clearly see it was Row F.

Imagine if I were sitting near Teach or Donny from American Buffalo.

“Fucking usher,” Teach would’ve said (not taking any responsibility for looking closely at his own ticket).

“Sorry, sorry,” Bobby would’ve said, when the correct inhabitants pointed out they wanted the seat they paid for.

“No shame in a simple mistake,” Donny might have said to himself later in the evening, after moving from Row E, Seat 204, to Row D, Seat 204. 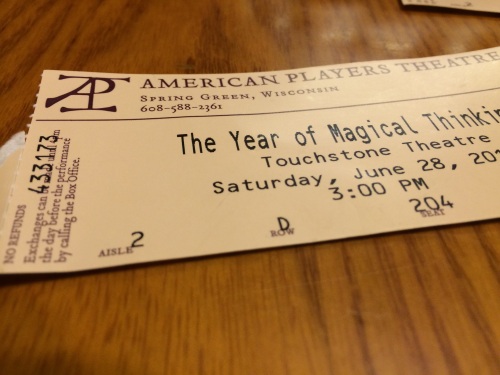 Teach would’ve had a manic meltdown; I just felt flustered (the house manager was just trying to figure out what the issue was; she’d found seats for the other people already). I said I’m sorry a bunch & I’ll say it again, to whomever I displaced, “I’m sorry.”

Last night, the second half of American Buffalo almost immediately distracted me from my flustered state.

I’m so, so pleased American Players Theatre decided to do Mamet.  And this play.  With these actors, because, of course–Brian Mani is perfect as Donny, put-upon, and too generous, and forgiving in such a complex way we feel equal parts pity and admiration for how he navigates his little world.

And oh, what frightening fun to watch Jim Ridge as Teach.

Part of the pleasure of going to APT year after year is seeing the actors in different roles. As I was driving home last night I was remembering Ridge as Tartuffe–serpentine and frightening and clever.  I think Teach thinks he’s serpentine and frightening and clever, but what’s frightening is how wrong he is about everything, how worked up he is about how right he thinks he is.  Poor Teach–he’s in a play by Mamet, not Moliere.

Awfully nice work, too, by Brendan Meyer, as Bobby.  And once again, I love plays directed by Kenneth Albers.

If you haven’t gone yet, you should go.  Or, to put in Mamet terms, you should fucking get there already. Lots of shows available from now through October.

You should also go see The Year of Magical Thinking.

Aaron Conklin has a fine review that I concur with, on every point.

In my head, I routinely mis-label Didion’s amazing piece as The Year of Living Dangerously, and that’s not entirely wrong. It’s a dangerous place Didion goes to, narrating her harrowing time when she lost her husband and child. It strikes me as dangerous for APT to have chosen the play, given the difficult subject matter. Sarah Day plunges into the danger of the subject matter, of course–courage has to be in the top five features of her mode as an actor.

And it is a dangerous journey for an audience, but it’s not unrelenting awfulness.  It really did feel like a journey, a necessary one.  There is humor and insight, too, but most importantly, I felt different when I left.  As though I had traveled somewhere I needed to go, and that I could now move on.  Kind of like a gentler, prettier Charon taking me partway across the river Styx and back to the land of the living.  A three-hour tour (well, actually two).

Pretty amazing. Lots of tickets available from now until October.

There are no more tickets for Pokey LaFarge, that show is done.  There are plenty of tickets left for other shows at The Sh*tty Barn, however, and if you’re kicking yourself for missing Pokey, you might get yourself a ticket for Nick Brown on July 30. In the venn diagram of Barn Sessions, there’s some overlap between Pokey and Nick in the area of Gentlemen Country/Western Swing styles–a genre I hadn’t realized I was craving until Nick’s show last summer.

I knew I was going to enjoy Pokey’s music, but I was a little nervous it was going to be hipster country, given the theatricality of the photos.  When I told people about him I’d been saying he looked like k.d. lang and Pee Wee Herman had a love child, and I’m not taking that back because it’s one of my favorite things I’ve ever come up with.

But I was happy to find out that k.d. lang was a good call–musically, it was a rich night, and the theatricality was not so much camp as just big, big fun.

The horn section was great: 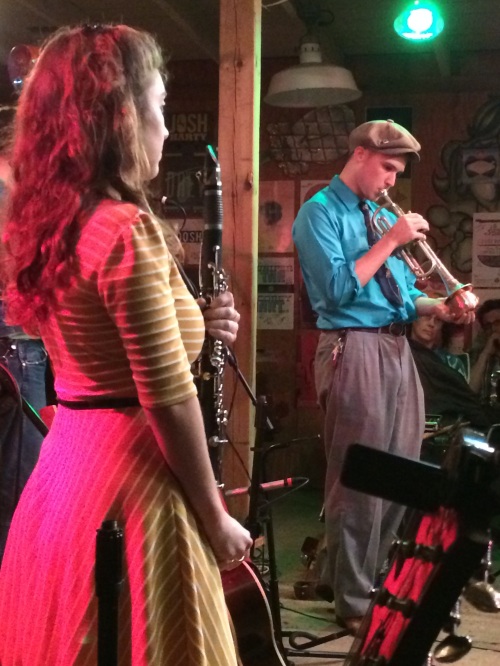 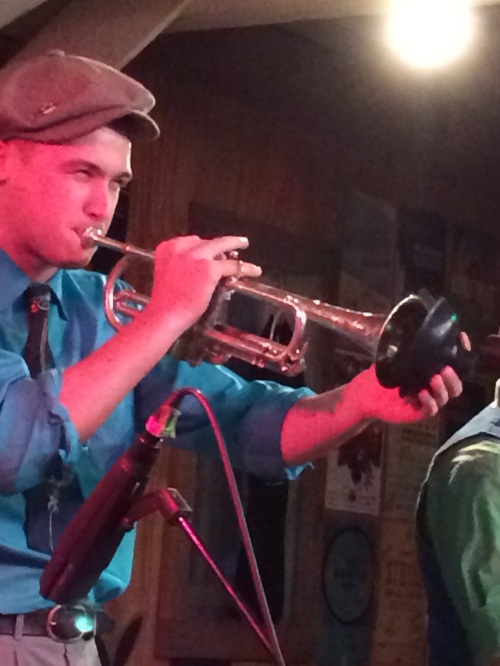 And once again, one of the many extreme pleasures of the Barn is how close you are to the performers.  I zoomed in a little, but not much to get this shot of Pokey his own self:

Everyone should come see great stuff in Spring Green. All summer long.

One response to “The Year of Buffalo Pokey”