[SPOILER ALERT: If you have seen trailers for the movie Captain America: The Winter Soldier,” you’ve already seen this scene–I’m not giving anything else away here, other than what Chevy cars show up in the movie.]

“The air conditioning is fully operational.”

Computerized, attentive, the voice of the Tahoe
recites time estimates and is just being rational,
still gets a pretty big laugh before it’s thrown
in the air and then upside down by a bomb
when it answers Nick Fury’s angry request,
“What isn’t damaged?” The answer then becomes
that Chevrolet is a company he can trust.

Black Widow rumbles in a new Corvette
(though I swear I thought it said Porsche)
and an Impala gets its own solid scene.
This is product placement at its best.

Like Cap himself–it’s honest, direct, authentic,
as up-front as a Silverado truck.

_____
Maybe I’ve become the ideal 21st century drone–I really don’t even mind the product placement in Captain America. I’m not sure how noticeable it would have been if 1)I hadn’t been trying to think of ways to write sonnets about cars because one of the big drivers for traffic on my blog is people who Google “car sonnet” and land on my category–which used to mean I started writing the sonnet in the car. Which I don’t do any more because it seems really obviously to be a case of distracted driving, even though I was pretty careful to do it only when there was next-to-zero traffic around. And 2)I hadn’t known I was going to see the movie twice, so I was letting myself pay attention to all kinds of everything the first time through.

It certainly wasn’t as awkward as the product placement in Back to the Future. COULD I HAVE A PEPSI?

And though I might be a drone about blithely noticing the Chevy vehicles in the movie, and while I would certainly accept a new Chevrolet in exchange for a fair number of product placements in my poetry, I doubt I’ll buy one. Of the cars I’ve owned, almost all have been Fords or Mercury products:
First car: Mercury Comet bought from my Aunt Toni. It was named Gloria & had a rust disease.
Next car: Mercury Comet bought from my Aunt Becky. It didn’t have a name or rust.
Next car: Mercury Zephyr.
(And then a Subaru Justy, which really shouldn’t count because it had only three cylinders and was totally totaled in a collision that would have caused only minor damage to my next vehicle,)
First truck: Ford Ranger, long bed.
(And then a VW Golf, which, regardless of paperwork, is actually my husband’s vehicle)
Current car: Ford Focus station wagon, silver, stick-shift.

It was my Gran’daddy who made me a Ford fan & that’s as permanent as being a Cardinals fan.
_____
Here’s a fun article on the product placement which SPOILER ALERT actually does say a couple more things about the movie you won’t know from trailers, and it also has the fun commercial with kids pretending to be Black Widow and Captain America.

_____
NaPoWriMo stats: I wrote poems on April 1, 2, and 3, but posted only a couple of those. Then didn’t write on April 4 or 5. Then here. Honestly? Not too worried about 100-percenting it. Just glad to write a little more. 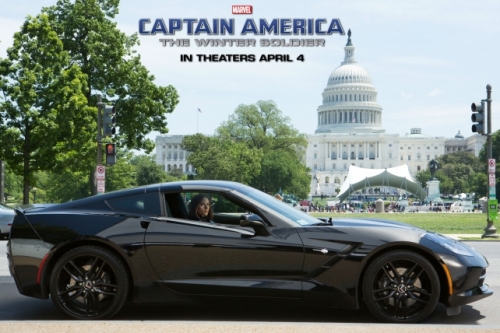 And you know, really, I’m remembering this car as having rounder front-end and butt. But I’m sure if everyone’s saying it was this car and it’s a Corvette, that’s really what it is and I must’ve just been revising it in my head based on the shape of the woman driving it.