Riding the line between abundance and chaos,
My stupid focus is on lack, lack, lack.
I try gratitude, but follow the switchback
Back toward loud whiny-assedness:
Too much. Too much! There really ought to be less
Except of course when there needs to be much more.
A good friend named my mountain bike “Pathfinder”

_____
12/9/12
Well, that’s it. It was a sestet after all. Moving on! With the same basic back and forth theme. I’m piggy-backing “less” on the ABBA rhyme scheme from the first quatrain. So, once again, I’m in the land of nonce sonnets (a sonnet that meets the basic rules of the form but doesn’t follow a famous/established pattern). I’ve always been pretty noncey. It’s the “ballpark” notion of prosody–my first prosody teacher would say fairly often, “Well, let’s call that a ballpark sonnet,” as in, it’s in the same ballpark. I try to be a little more precise than that, but for me, a poem has to follow some sort of rules, even if the rules are brand new. There has to be some kind of surface tension holding things together. I wonder if it’s surface tension I mean?

In any case, once I said “switchback” in line three, I was back in Missoula, so the mountain bike was bound to show up. 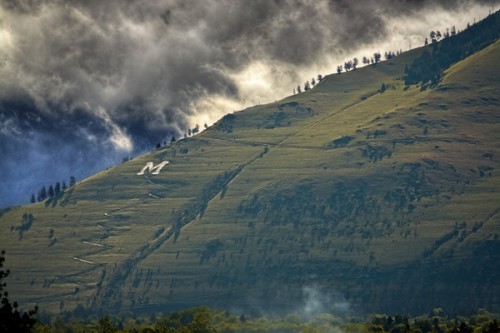 Two books I’m reading, well, three, are in my mind in terms of content or theme here (beyond the basic back-and-forth theme, which is more of a structural principle): Anne Lamott’s Help Thanks Wow, Brené Brown’s I Thought It Was Just Me and Thich Nhat Hanh’s Living Buddha, Living Christ. Instead of being all monkey-minded, whiplash-mooded, and spiritually spastic, I’m aiming for some measure of mindful equilibrium. “And how’s that working for you?” I say to myself…. I’m tentatively calling this poem “Sustainable Chaos,” even though I already wrote one other poem called that. Listen. If George Foreman can name every child “George,” I can use the same title more than once. But “Sustainable Chaos” appeals to me in terms of how I want my life to feel and be.
_____
12/8/12
Decisions, decisions. Today we reach the end of a sestet–a little six-line cluster. If we’re going traditional Petrarchan, we’ll push on for a couple more lines to complete the octave (8 lines, if you didn’t know) and THEN shift gears. The rhymes seem to indicate I’m in an octave, not a sestet. I was kind of mis-remembering, forgetting I’d set up “whiny-assedness” to rhyme with “abundance and chaos,” only remembering that “less” rhymed with “ness.” I thought briefly about trying to rhyme with “less” so this could decide to be a sestet.

I’m a little worried that the two less/more lines are too obvious, but I like having them as end words there in the early-middle of the poem.

Well, really, it’s tomorrow’s decision, where to go from here. Just feeling the impendingness of it today.

p.s. I told my husband last night what I was up to with this and he totally got it, how hard it is for me to do this just one line a day, since I often write a sonnet, or most of a sonnet, in the car on the way to work.

Fortunately, this isn’t the only writing I’m doing.
_____
12/7/12
So, no Babe the Blue Ox in the Slough of Despond yet. But there’s time. We’re only five lines in. A whole universe of crap can happen in 9 lines in a sonnet. Right now I’m thinking the next line will begin

but I could totally change my mind by tomorrow.
_____
12/6/12
I decided I’d try to write a sonnet over a two-week period (14 days–seemed liked fate), one line a day. Curious if I’ll do it–I’m trying not to anticipate what I might write the next day or later, though it occurred to me this is kind of a version of Bunyan’s Pilgrim’s Progress, which made me think of Paul Bunyan, so they might show up, with Babe in the slough of despond or something. Or not.